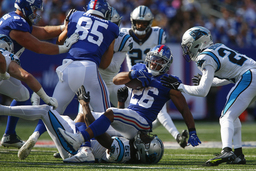 EAST RUTHERFORD, N.J. (AP) With Brian Daboll as their coach, the New York Giants are doing something they haven't done for more than five years: They're finding ways to win consistently.

Graham Gano kicked a 56-yard field goal with 3:34 to play, and the Giants ignored being booed off the field at halftime and beat the Carolina Panthers 19-16 on Sunday.

New York improved to 2-0 for the first time since 2016 and sent the Panthers to their ninth straight loss.

"Whether you score a lot or not, it's important to figure out ways to win games," Daboll said. "You can win a game a variety of ways, and also lose it a lot of ways. Again, the object of the game is to have one more point and to give yourself a chance in the fourth quarter."

That's what the Giants have done the first two weeks in beating Tennessee and now Carolina.

The Panthers (0-2) are doing the opposite. They dropped a 26-24 decision to Cleveland on a late field goal last week. On Sunday, they spotted the Giants six points early and allowed New York to come through late.

"We prepare our (tails) off," said Baker Mayfield, who was 14 of 29 for 145 yards and a touchdown. "We work during the week. There's no question about that. We're ready to go. We just have to come out and execute."

Gano also hit from 51, 36 and 33 yards and Daniel Jones found rookie tight end Daniel Bellinger on a 16-yard touchdown pass as the Giants responded in the second half after the game was tied 6-6 at the break.

Saquon Barkley, who rushed for 72 yards on 21 carries, had runs of 10 and 8 yards as the Giants responded with an 11-play, 37-yard drive to take the lead. It was much like New York's late drive against Tennessee, which ended with a TD and 2-point conversion.

"It's exciting, it's hard to win in the league, but we got to treat it like a loss when we watch the film," Barkley said. "We have to be our biggest critics and see what we can do better. These last two wins we didn't come out fast. We can't do that but our defense made plays for us."

The Panthers got the ball back after Gano's go-ahead kick, gained 12 yards and were forced to punt after Julian Love sacked Mayfield on third down.

The Giants took over and Jones (22 of 34 for 176 yards) closed out the game after he scrambled for a first down on third-and-6.

Christian McCaffrey led the Panthers with 15 carries for 102 yards.

The Panthers' losing streak is the longest active skid in the NFL. Matt Rhule is 10-25 as Carolina's coach and fans are losing patience.

"That's two games in a row where we came down to the end with a chance to win the game and come up short both times," Rhule said. "I take full responsibility for that. That's my job. That falls on me. I have to help these guys find a way to make one more play and win the game."

The Panthers tried to hand the game to the Giants early. Chuba Hubbard, replacing the injured Andre Roberts, fumbled the opening kickoff. Receiver Robbie Anderson coughed up the ball on the next series after a catch at his own 40.

Despite great field position, the Giants were shut down by Carolina's defense - New York was held to 60 yards in the first half - and settled for two field goals.

The Giants signed wide receiver Kenny Golladay to a four-year, $72 million contract in the spring of 2021. He failed to score a touchdown last season and he was one the field only a few plays on Sunday. Don't be surprised if the Giants do something.

The Panthers open a three-game homestand against the New Orleans Saints next Sunday.

The Giants play their second game in a three-game homestand when they face the Dallas Cowboys on Monday, Sept. 26.